Two weeks ago I shared part of a post by Maryellen Weimer, titled, “Students Think They Can Multitask. Here’s Proof They Can’t.“

Today I’d like to meander in a slightly different direction. A post I came across by blogger and associate professor of psychology, Erica Kleinknecht, suggests otherwise. It seems that students can multitask, in a way, if, as Kleinknecht phrases it, the task they are engaged in is “rich with detail that can serve as cues for later memory retrieval.”

Kleinknecht’s post, “Don’t Forget to Write,” is about why handwriting makes for a much more effective mnemonic device than typing. She explains that “Forty-plus years of empirical work in memory and discourse processing support the statement that [handwriting] is rich with ‘encoding specificity,'” which describes the specific, embodied “cues” by which your brain can later access the overlapping memories of the act of writing and the content that writing recorded, or, perhaps, what one was thinking and/or hearing as one wrote.

Kleinknecht’s vaunting the value of old-fashioned handwriting has met some resistance. And why not? Is it possible that Kleinknecht is oversimplifying the divide between handwriting and typing? Is she demonizing electronic forms of engagement in the classroom? Is she presenting us with the now-familiar scapegoat for teaching failures: digital media, and the shortcomings of a digital generation? In a way, Kleinknecht and Weimer seem to be in agreement: both of their posts might suggest a certain distrust of the use of electronic devices in the classroom. But I don’t think it’s really possible to attribute such a simple, knee-jerk, luddite reaction to electronics in the classroom to either Weimer or Kleinknecht–they are too thoughtful, and their work is just too well-researched.

Instead, what if the take-away point from both writers is that a certain type of multitasking, a certain type of embodied learning, is actually ideal in classroom environments? Should instructors be encouraging physical, bodily forms of making learning memorable?

I recently stumbled across a new trend in education and design spheres: Sketchnotes. What are sketchnotes? Rachel Cole explains: 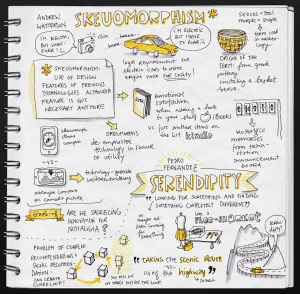 A sketchnote by Eva-Lotta Lamm,
from http://sketchnotesbook.com/

“Visual note taking opens the door for more playful connections between information — for students to use their imaginations, in an activity than can often be very passive — note-taking.”

Quite simply, sketchnotes are notes taken in class that actively involve doodling, regardless of the note-taker’s artistic ability. We’ve all done this–we’ve all sat in classrooms and workshops and found ourselves doodling in the margins of our notebooks. But how have we viewed this activity? As distraction? As disrespectful non-participation? Or as a productive, even necessary part of active listening? For my part, I’ve realized that I’ve always thought of such doodles as, well, unseemly–a bad habit I try to refrain from, but to which I always find myself returning, not without a measure of academic guilt.

Sketchnotes had been on my radar for a week or so when I attended training led by my supervisor at the Student Success Centre on active listening and mentoring. During that session, I decided to give sketchnotes a try, and I let my yearning to doodle run totally wild. I’m not sure this was the best decision, on my part: I committed myself to doodle in a professional space just as I might have in Grade 6, and during a workshop all about active listening–listening where the listener is engaged with the speaker, leaning forward, nodding, affirming, acknowledging, etc. Needless to say, I wasn’t always able to model that behviour. I had more important things to consider: Was orange really the best colour for the ear I had sketched in the top left corner of my notes?

I decided to start doodling that day–er, sketchnoting–mostly to assuage the nagging urge welling up inside of me to run out of the room braying like a donkey. The workshop was very engaging. I enjoyed it, and I learned a lot from it. I really appreciate the workshops my supervisor gives. And I’m not just saying this because my supervisor might be reading this! Ha! The thing is this: fantasies of running from a room like a distressed donkey have of late become a sort of inevitability for me when I feel compelled to sit for even brief periods as an audience member at a talk. I think my tolerance for sitting still and being quiet has diminished rapidly of late with the number of hours I’ve logged at my desk working in isolation on my dissertation.

So, to quell mad-donkey visions, I wrote out the phrase “active listening” down the left side of a piece of paper, which quickly became an acronym for words and phrases drawn out in different styles, now running left to right. The funny thing, though, is that my doodles weren’t exactly on-topic. Instead, it became a sort of half-baked crossword: while part of my attention was focused on the workshop, another part of my brain was busy thinking of the best possible words to fit into my acronym. While on-topic words like “acknowledgment” made an appearance on my acrostic, other words appeared just because I liked them: “egregious,” and “eschatological,” were my favourites. Over a five-minute break in the workshop, a colleague sitting next to me wanted to learn more about my notes. When the session resumed, he joined in: we flipped the page over, and he was soon drawing way better sketchnotes than my own. Again, though, they weren’t all on-topic: he drew a watery moat around the prefix “re” to visualize “remote”–which was on-topic–but he also wrote the word llama in the shape of a llama (!)–which, not surprisingly, was not.  I mournfully rue my unduly precipitous decision to drop that work of collaborative, orange-inked genius into a recycling bin on the way out the door. I wish I could share it here. A llama! A LLAMA!

I think Erica Kleinknecht is right to draw our attention to the important role embodied forms of listening and note-taking play in memory recall. I would even suggest, against the Sketchnotes trend, which seem to all be rather topical–that it doesn’t always matter what you are recording as you hand-write in a class. I learned so much from that workshop I attended, in part because I gave myself permission to doodle. It seems that students can multitask; perhaps they even should multitask, but in ways that involve a level of physical investment.

In other, more straightforward terms: active learning is good.

For more sketchnotes, check out: http://sketchnotearmy.com/

5 thoughts on “Students Can’t Multitask. Or Can They?”